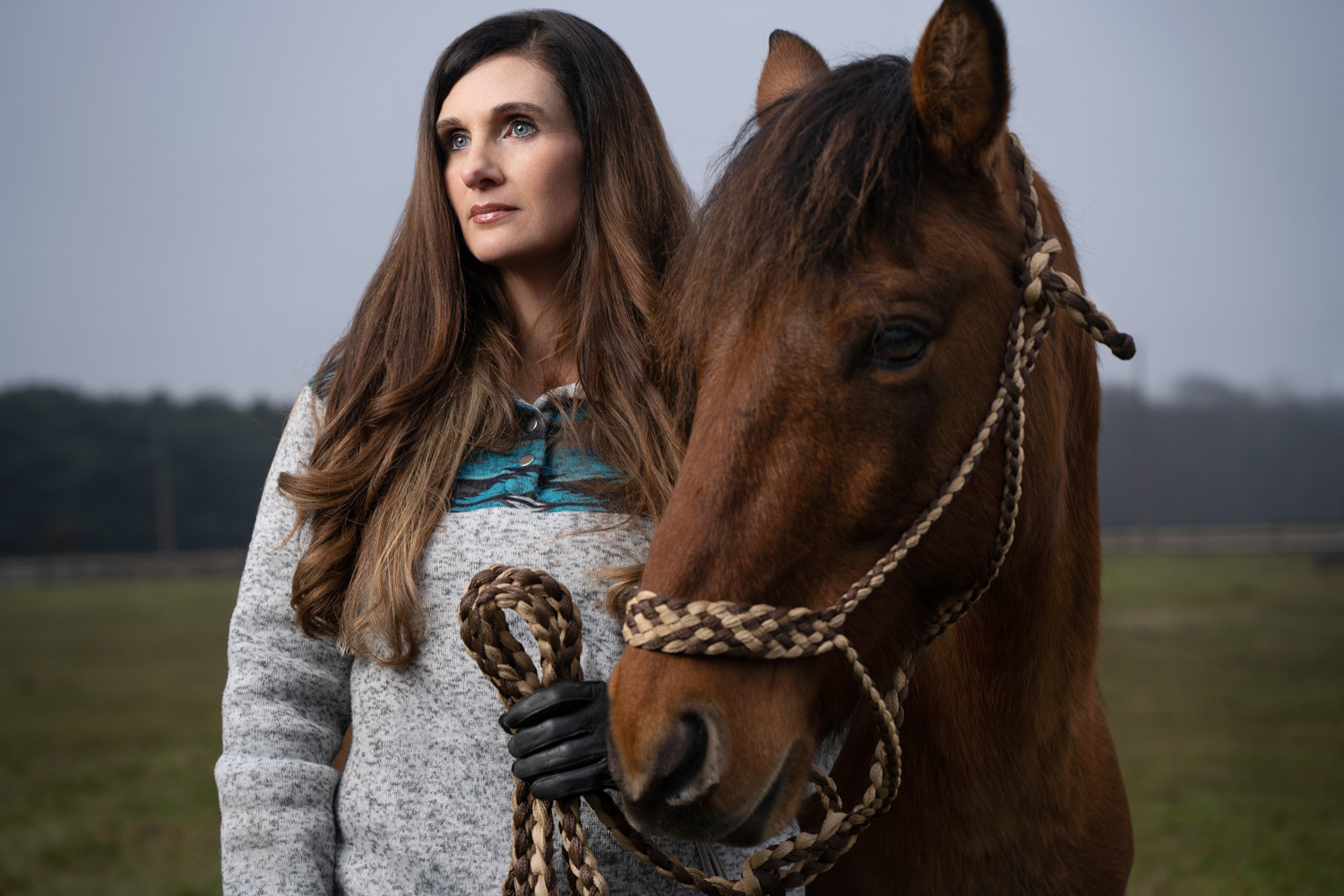 Amanda Held helps veterans like her through equine facilitated learning

At just 3 years old, Amanda Held knew exactly what she wanted out of life.

“I started saying horse over and over,” Held says. “I was just obsessed.”

So, when she was 4, Held’s mom began to drive her 40 minutes from their home in Toledo to Delta a few times a week just for riding lessons. Growing up, horses were a constant in Held’s life. But when she decided to enlist in the U.S. Air Force at 18 years old, she had no choice but to give them up – and it wasn’t easy.

“I couldn’t even go into somebody’s barn without crying. It was just devastating,” she says.

She jokes that a friend mentioned that it would be “cool” to join the military and get in shape and Held agreed. Before she knew it, her mom, Pamela, was loading her in the car to bring her to a recruiter. The decision was fast, but it was right.

“Best decision I ever made. Totally. It’s been an integral part of how I got where I’m at,” she says. “The military gave me my life. It gave me my confidence. It gave me connection. It gave me the ability to be part of something. I really found myself in those years and really came out of my shell.”

Held was active duty from 1999 until 2003. By 2003, she was stationed at Schriever Air Force Base in Colorado Springs, was married and had one kid with another on the way. But due to the cost of daycare and other expenses, she decided to leave the military to be a full-time mom. Held loves being a mom, but the transition out of the military left a void in her life.

“I lost that sense of purpose, I lost the camaraderie,” says Held. “That can be traumatic, I think, in and of itself.”

Held often found herself sitting on the fence at a nearby stable, watching people ride and interact with the horses. One day, a stable worker approached Held and introduced himself.

She replied, jokingly, “Hi, I’m Amanda and I like horses.”

The meeting was serendipitous – a word Held often uses. She began to volunteer at the stable, and soon they convinced her to adopt and train a wild mustang, something she’d never done before. They had corralled about 50 wild foals, and when Held approached, they all ran but one.

“She had big old donkey ears and she’s what they call a red roan, but she almost looked purple in the sun. She was very odd-looking,” says Held. “But when I turned around to go back into the barn, she followed me.”

So, in 2005, Held adopted the odd-looking, donkey-eared red roan, who she named Shelby. As Held began to train Shelby, she saw a major change in the horse – and herself.

Working with Shelby, she says, gave her the confidence to move forward from her challenges at that time.

“I called my dad and said, ‘I’m coming home, you need to come get me, but don’t come without a horse trailer because I’m not leaving Shelby,’” says Held. “I put the kids’ beds in whatever I could fit in one half and I put my horse in the other half.”

She moved in with her parents, who were now living in Swanton, with her kids and stabled Shelby nearby. Once again, Held says, she felt like she had hit rock bottom – but this time she had newfound confidence and determination. She went to Owens Community College and got her associate degree in small business management while working as a waiter.

Her love of horses never went away, though, and when her grandfather made mention that he’d passed a farm for sale in Grand Rapids, Ohio, Held had to take a look. She jokes that she was a single mom and waitress, how was she going to afford a farm? But when she stepped on the property, her mind was made. She called her dad, Ron, who was also recently divorced, and convinced him to invest.

“We’re both kind of at crossroads in our lives and he was like, yeah, well, let’s look into it,” Held says. “Long story short, 60 days later, we were moving in.” 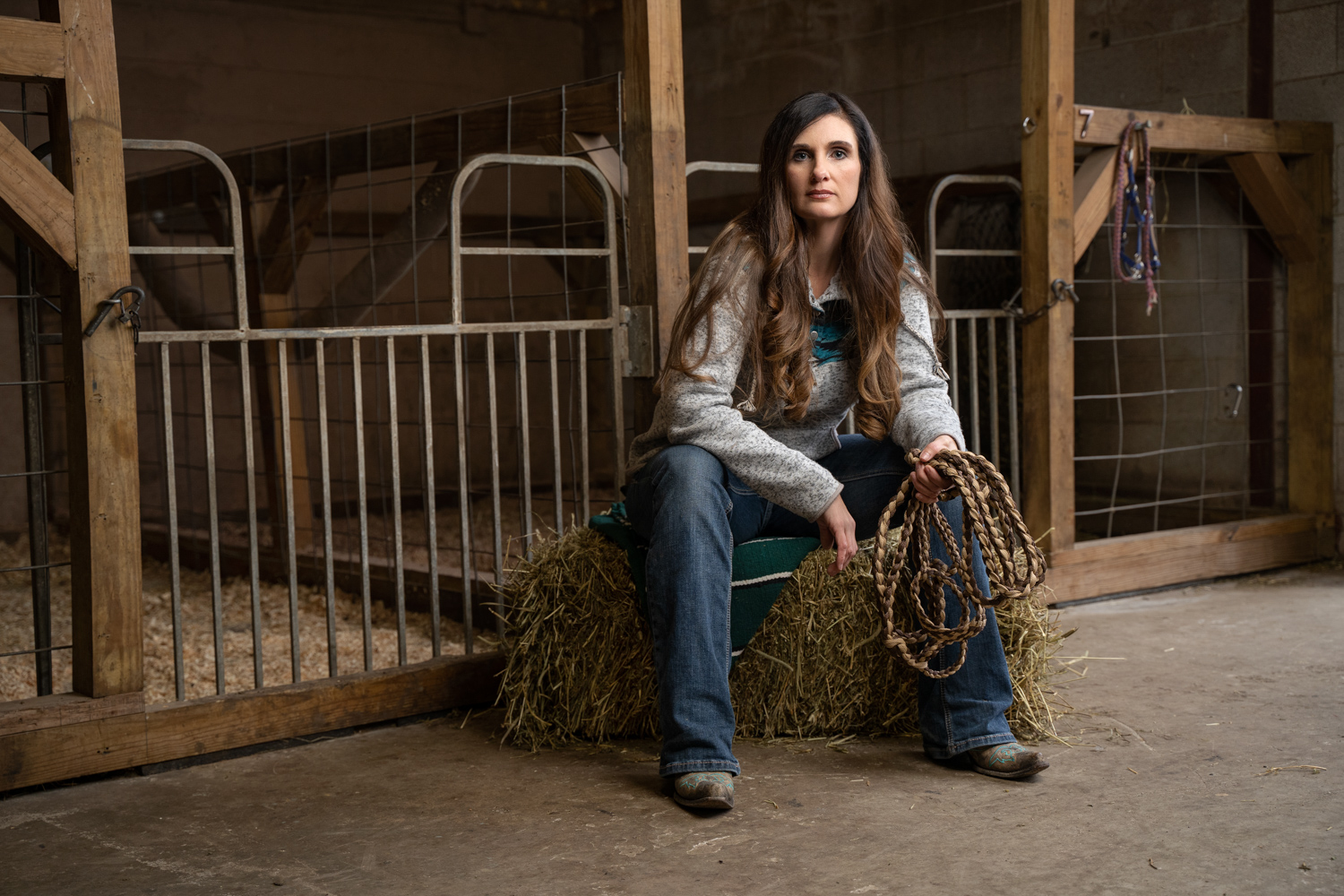 Within six months, Held was boarding 40 horses and was teaching others how to train their own horses. The clients you attract, Held says, are often a reflection of you, and she found herself teaching successful women with confidence issues how to train their new horse with behavioral problems.

After a series of more serendipitous moments, Held joined the 180th Fighter Wing; found a new purpose through EAGALA, the Equine Assisted Growth and Learning Association, providing healing to clients through equine therapy and learning; and she visited a three-day retreat that would change her life and set herself on a path toward healing. Held felt she was finally hitting her stride.

Then, two days after Christmas in 2013, her dad had a heart attack and passed away unexpectedly.

“Everybody was like, ‘Amanda is not going to recover from this ever.’ Like, they didn’t think I could do it without my dad,” she says. “He had provided a lot. He provided finances and support and manual labor. So he was a huge piece of it, and I couldn’t keep the farm without him.”

Held got a job in sales and marketing for a pain clinic, and with her kids moved from the farm into a 950-square-foot cottage in someone’s backyard. The rug had again been pulled from under Held’s feet – but she wouldn’t be kept down for long.

In July 2015, she met her now husband, Justen Held, and Justin encouraged her to return to horses. But this time, Held wasn’t just taking any client. Shelby had helped save her, and she knew equine facilitated learning could do the same for other veterans with PTSD.

She held one-day workshops at local barns whenever she could, but her clients were soon saying they needed more than a day. In October 2017, she organized the first three-day retreat at OH Stables in Oregon and planned to house clients across the street at Maumee Bay. The only problem was the cost: $6,000.

She asked her community for help, and they listened. The family members of U.S. Marine Justen Caris, who had taken his life by suicide in 2016, organized the Annual Justen Caris Memorial Poker Run, and decided to donate the proceeds to H.O.O.V.E.S., the rebranded name of Held’s charity. In the past, the poker run pulled in about $1,500 – wonderful, but not enough to host the retreat. Held’s serendipity came through again.

Then, Caris' uncle took the mic and told the room: We can do better. He passed a tub around and asked everyone to again give what they could. In just three minutes, H.O.O.V.E.S. had another $4,000. The three-day retreat was a go.

H.O.O.V.E.S. has gained momentum each year since. Held was able to buy a large farm in Swanton with enough space to stable the horses and house veterans during their three-day retreat. She hosts seven retreats per year, 10 veterans per retreat. She is now training past participants to become retreat leaders, the future faces of H.O.O.V.E.S. Additionally, she brings equine facilitated learning around the country, including through an annual retreat for the Confederated Salish and Kootenai Tribes in Montana.

Held’s husband Justin has also joined in on the mission of helping veterans heal by offering adventure bikepacking for veterans in recovery through his program Miles 2 Freedom. Though her kids chose not to pursue a career in the military, the program has had an impact on them, too. Joelle, 20, is a paraprofessional for Northwood Local School District, and Trent, 18, is pursuing a degree in psychology at Ohio University in Athens. They both want to contribute to H.O.O.V.E.S. in their own way. Trent even floated the ask during move-in weekend at Ohio University.

“You know, he asked me when I dropped him off, he said, ‘When I get my degree, can I come work for you?’ Which I thought was so precious,” Held says. “Then my daughter, … she’s really passionate about helping kids. She’s interested in being involved in some of the youth programming out here. It’s crazy because both my kids want to come back.”

They want to come back here, to the Toledo Region, where Held has been through so many ups and downs – but she’s found a home where she is healing herself and others. She’s providing a space for veterans to “transform post-traumatic stress into post-traumatic growth.”

And if you drive up the long, winding driveway of H.O.O.V.E.S., walk past the large retreat home at the end and approach the paddock, you might just see now 17-year-old Shelby, the horse who helped start it all, who has since transformed into a beautiful and strong gray mare, saving the lives of many veterans along the way.

“It doesn’t matter what the world throws at you. You can do anything,” Held says. “That’s what my dad always told me: Don’t limit yourself.”