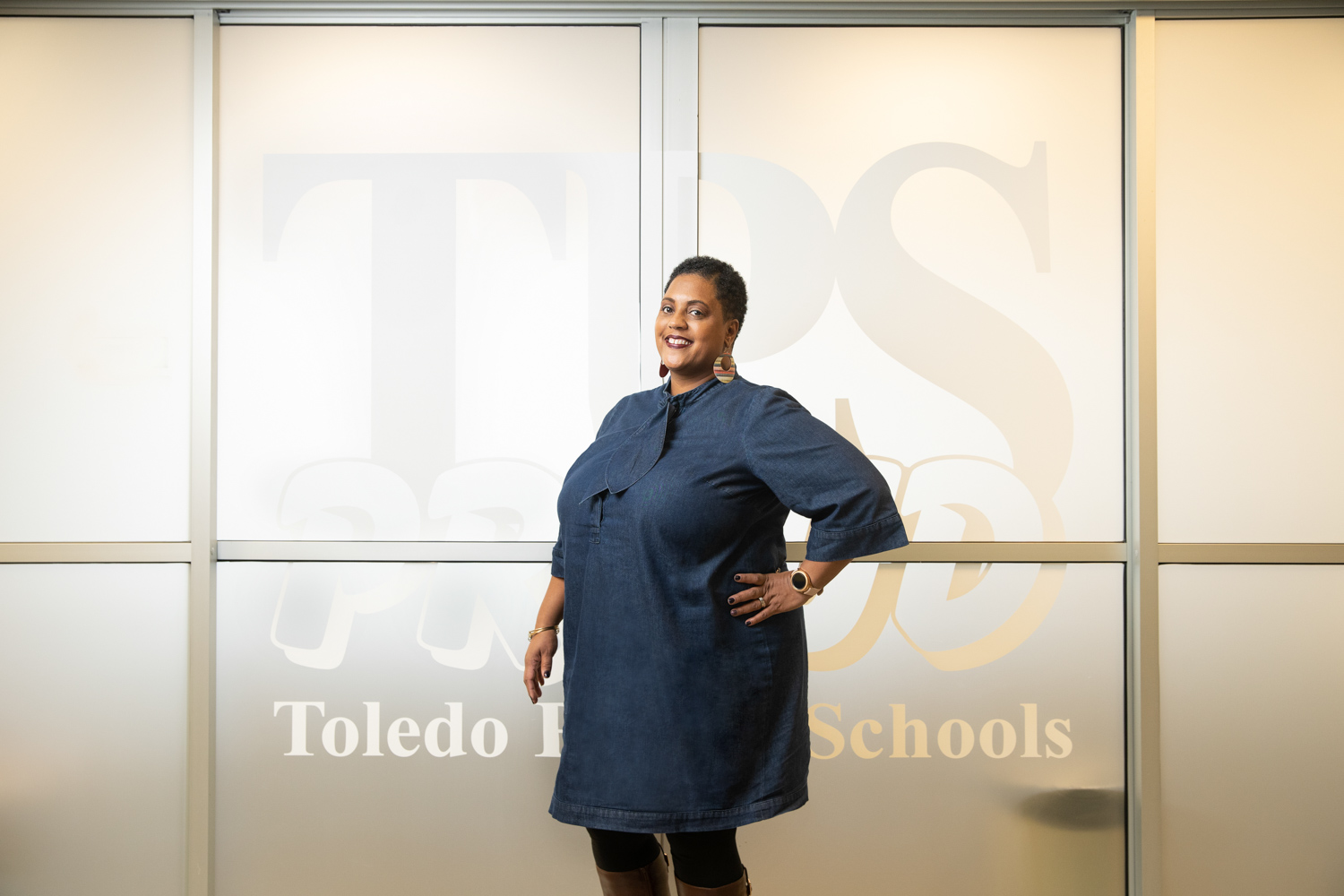 Yet, those most passionate about Toledo stayed – and their passion only grew. And now, as the city experiences a boom of new growth and development, they’re reaping the reward of being part of it.

“I can say I’ve been able to see it in its heyday and, now, kind of building back up. I feel like the start of it would’ve been Fifth Third Field coming downtown,” says Harrison. “You know, 2012 and on, it just seems like every time you look up, it’s something new. New hotels, new restaurants, new companies that have never even thought about being downtown moving their whole headquarters downtown.”

Now 44 years old, Harrison is external communications manager for Toledo Public Schools. She has two children, Douglas Robinson III, 20; and Brooklynn, 11. Her husband, Brandon Harrison, is a detective with the Toledo Police Department. Though Harrison and her husband briefly considered moving out of Toledo after they were married, they decided to stay, and Harrison has rooted herself as an integral member in the northwest Ohio community.

“I love Toledo; it’s home for me,” Harrison says. “When I think about the relationships I would have to leave behind, the different things that I’ve become a part of, the projects I’m helping move along, then I’m like, no, I want to stay.”

Harrison is on the board of Leadership Toledo, the University of Toledo Alumni Association, a member of the African American Leadership Council and Women’s Initiative of United Way, PRSA, is a member of the Press Club of Toledo board, and is co-chair of youth services for the Rotary Club of Toledo. She’s also a member of Delta Sigma Theta, The Links Incorporated, and is on the community engagement committee for the City of Toledo’s Human Relations Commission and Momentum Toledo’s community engagement committee.

Harrison is an active, dedicated member of the community to say the very least.

“I love service, but I also like decision making. I like being in a position where my hands aren’t just of service, but my voice,” says Harrison. “I’m always seeking opportunities to being in a role where I can lead; I’m not a follower. And, you know, sometimes I’m pleasant, but when it’s time to be unpleasant, I can do that, too. Whatever I need to do to get things moving.”

Though she says it with conviction, after a quick conversation with Harrison, “unpleasant” is the last word one might use to describe her. Talking with her is easy, and she immediately feels like an old friend. It’s a quality that’s helped her get to where she is today.

“I feel like that’s one of my biggest strengths; I’m old enough to be someone that younger people perceive as wise, but I’m not so old that I’m out of touch with what they’re doing,” Harrison says. “I’m able to be relatable and then impart some wisdom; I’m big into helping people grow. I’ve never been one to hold people back.”

It isn’t just generational divides she’s able to bridge, however. Harrison has always found it important to break down the barrier between socioeconomic statuses, or at least be able to speak for someone who isn’t at the table themselves. With the region’s rapid growth in the last few years, Harrison has found it tantamount to ensure the community doesn’t forget a huge part of what makes Toledo, Toledo.

“It’s really easy, in the process of growth in a community, for people of color to get shut out. I’ve been really proud to have helped, through my organizational membership and just relationships in the community, to be able to connect,” Harrison says, “and make sure that we’re able to reach everyone as we continue to grow.”

Despite her massive involvement throughout the community, and her passion for connecting leaders in major organizations to leaders in small neighborhoods, Harrison does find free time. She loves pop culture and going to craft breweries with her husband – her favorites are Black Frog Brewery, Earnest Brew Works and Maumee Bay Brew Pub. She still has a large group of friends from childhood who are still in the region, and loves spending time with them.

Toledo may have changed dramatically since she was a little girl sitting at the counter of Woolworth’s with her grandmother. Still, here in Toledo, life is good.

“I feel as though I’ve become my version of successful here,” Harrison says. “I love the comfort of living in a place I grew up in and having the freedom to travel as necessary and explore other places. But where I lay my head, I like to be comfortable.”

Harrison is excited to see how the waterfront is revitalizing, where she remembers fishing with her dad, watching the fireworks and even competing in a Double Dutch competition when she was in elementary school. She loves to see the conservation efforts by Metroparks Toledo, particularly the new initiative of installing a park within five miles of every resident.

But most of all, like many others in the community, Harrison isn’t standing idly by as change happens around her: she’s taking an active role herself.

“A lot of women in any community, but big in the African American community, will say, ‘Bloom where you’re planted,’” says Harrison. “So, that’s where I’m at. I’m blooming here, where I’m planted in Toledo.”