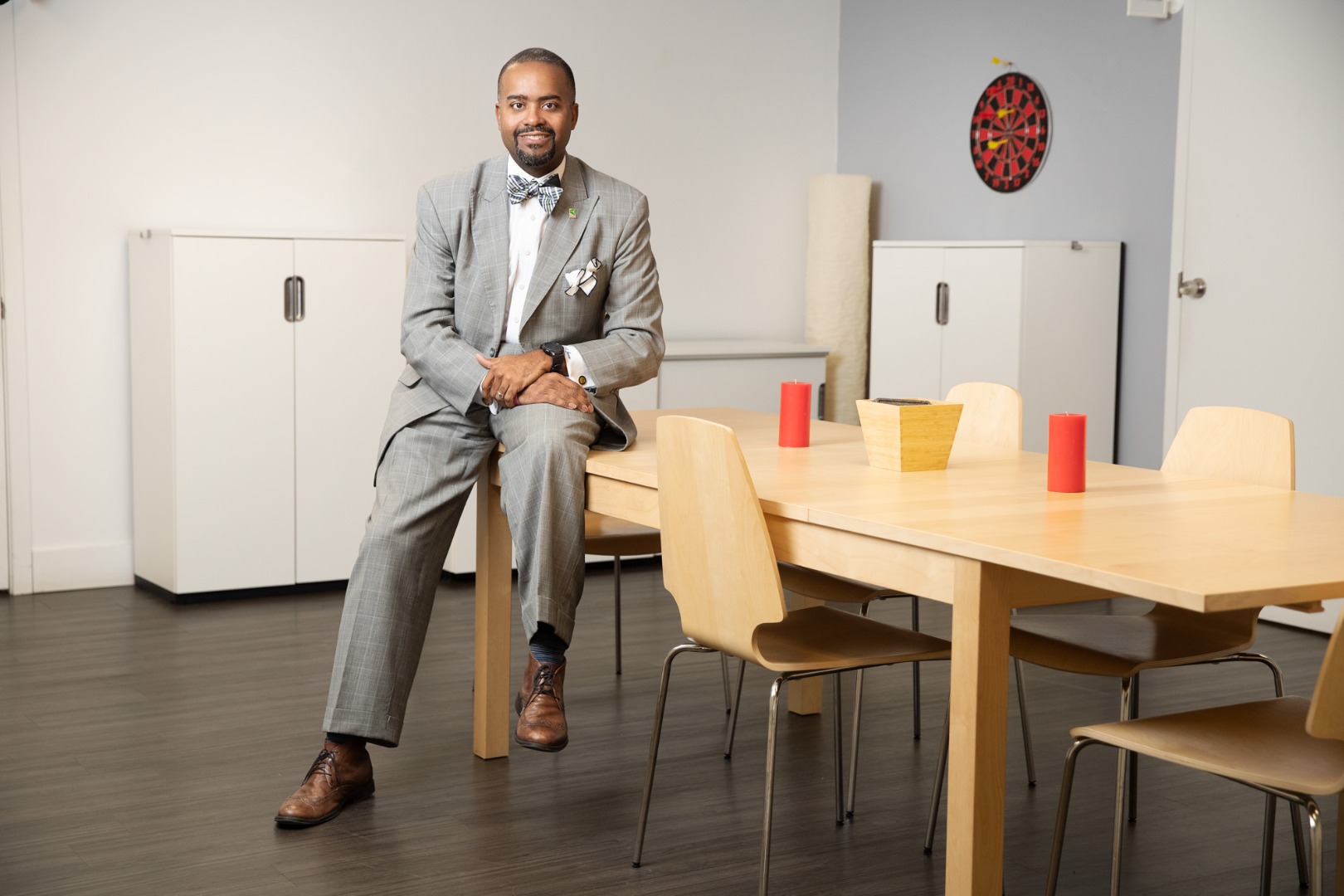 John Jones serves the underserved through faith and health

The fact that John Jones hasn’t moved far throughout his life isn’t by accident: it’s by design.

He was born – and still lives – in the Junction Neighborhood, just three blocks from Christian Temple Baptist Church, where he’s a minister. The same church his brother and father are ministers. The same church whose first pastor was his grandmother.

“Our belief is, and it’s not that you can’t do it any other way, but you just live in the neighborhood you serve,” says Jones. “I’m a community baby, so to be able to serve from a faith perspective is outstanding, but then I can work in the same community.”

The ideas of community and connectivity are king in both Jones’ personal and professional lives. After graduating from Central State University in Wilberforce, he had plenty of offers to leave his hometown behind. However, he saw an opportunity here – one that didn’t exist anywhere else.

“Part of what made me want to come back to Toledo is that level of connection,” Jones says. “I saw that there are opportunities to do some really good stuff here. … I can do all this great stuff from Toledo – I don’t have to be anywhere else.”

So Jones came back. He started with Ernst & Young, then moved to ProMedica to work in its financing department. From 2008 to 2012, he was president and CEO of the Greater Toledo Urban League, and started its now-defunct young professionals organization. He was young, but thrived as a representative for the national organization. He knew, however, that the job wasn’t going to carry him to retirement, and when ProMedica CEO Randy Oostra reached out for a conversation, Jones complied. He returned to ProMedica but this time, instead of crunching numbers, Jones took the development and leadership talents he’d fostered through the Urban League and his church to the health care system.

Soon, Jones would become the associate vice president for the Governance Office and Office of Diversity and Inclusion, working with ProMedica’s new Social Determinants of Health Institute. The institute’s goal is to close the disparities in health care and meet the needs of the underserved – exactly what he’d been doing his entire life in one capacity or another.

“We’re talking about helping change the community and doing it around education and employment, job training, health, all this stuff,” says Jones. “Quite honestly, I laugh about it. It’s Urban League (work) all day. It’s like, dude, I can do this. I can do this all day long.”

His tireless work at ProMedica and in his community didn’t go unnoticed, and he soon became connected to other Toledo organizations. He serves as board chair of the Toledo Zoo and Aquarium and is involved with Cherry Street Mission Ministries, among a swath of other organizations – too many to list here. Everything he does falls in line with his No. 1 goal: to help others connect.

“Each one of us is put here for a finite period of time, and if we are engaged enough and see opportunities enough, we have a unique chance to make a small difference in that space,” says Jones. “My whole goal in life is how do I help others become exactly what God intended for them to be – whether they have a religious connection or not?”

Helping others connect to Toledo and helping elevate northwest Ohio is personal for Jones. His entire family lives in Toledo, and he’d love for that tradition to continue through his three children, Naomi, Cathryn and John Michael.

“If we don’t do the right things now, our children won’t come back,” Jones says, “so, some of this is personal. It’s personal and selfish, and I don’t have a problem saying that out loud because most parents would appreciate being able to hang out with their babies and grandbabies. And if we’re here long enough to see all that, that would be phenomenal.”

However, anyone who knows Jones knows he’s anything but selfish. Through Urban League, his church and ProMedica, Jones has dedicated his life to uplifting his community and ensuring that nobody is left behind as Toledo grows.

“I won’t say it’s the most, but I think Toledo is in one of the most crucial time periods across history. And we have a real opportunity to write the story in a way that will have, I believe, impact for generations,” he says. “I think there are people who are sitting in seats that understand that in ways they didn’t understand it before, and we’re seeing a lot of discussion about inclusion and things of that nature. That, for me, is critical.”

Now that ProMedica’s offices are downtown, Jones’ church, home and work are within a three-mile radius of one another. That means he has more time and opportunities to achieve and push a greater connection. However, he notes that he’s not alone in that goal. He mentions the University of Toledo’s Clinton Longenecker and Tricia Cullop; Bowling Green State University presidents Sharon Gaber and Rodney Rogers; and Fifth Third Bank President Bob LaClair, acknowledging that he’s not alone on his mission to connect Toledo – he’s one part of a greater movement.

“I think that level of connection for Toledo is really the strength of our city,” says Jones. “Toledo gives you a really unique way in which to connect. So there’s a lot of reasons to stay, a lot of reasons why I came back.”

As Toledo continues to grow and leaders push its boundaries together, Jones has no plans to go anywhere; you’ll still catch him around the Junction Neighborhood; spending time with his kids and new bride, Charity; and growing his engagement both at ProMedica and Christian Temple Baptist Church. And, in his spare time, finding time to hit the links, travel, exercise and volunteer. After all, he admits, as long as he gets between four and six hours of sleep at night, he’s happy.

“The heart of what I do, it’s always going to come back to helping other people,” says Jones. “If I see anything on the horizon in the next five years, it’s really finding ways to help as many people as possible.”