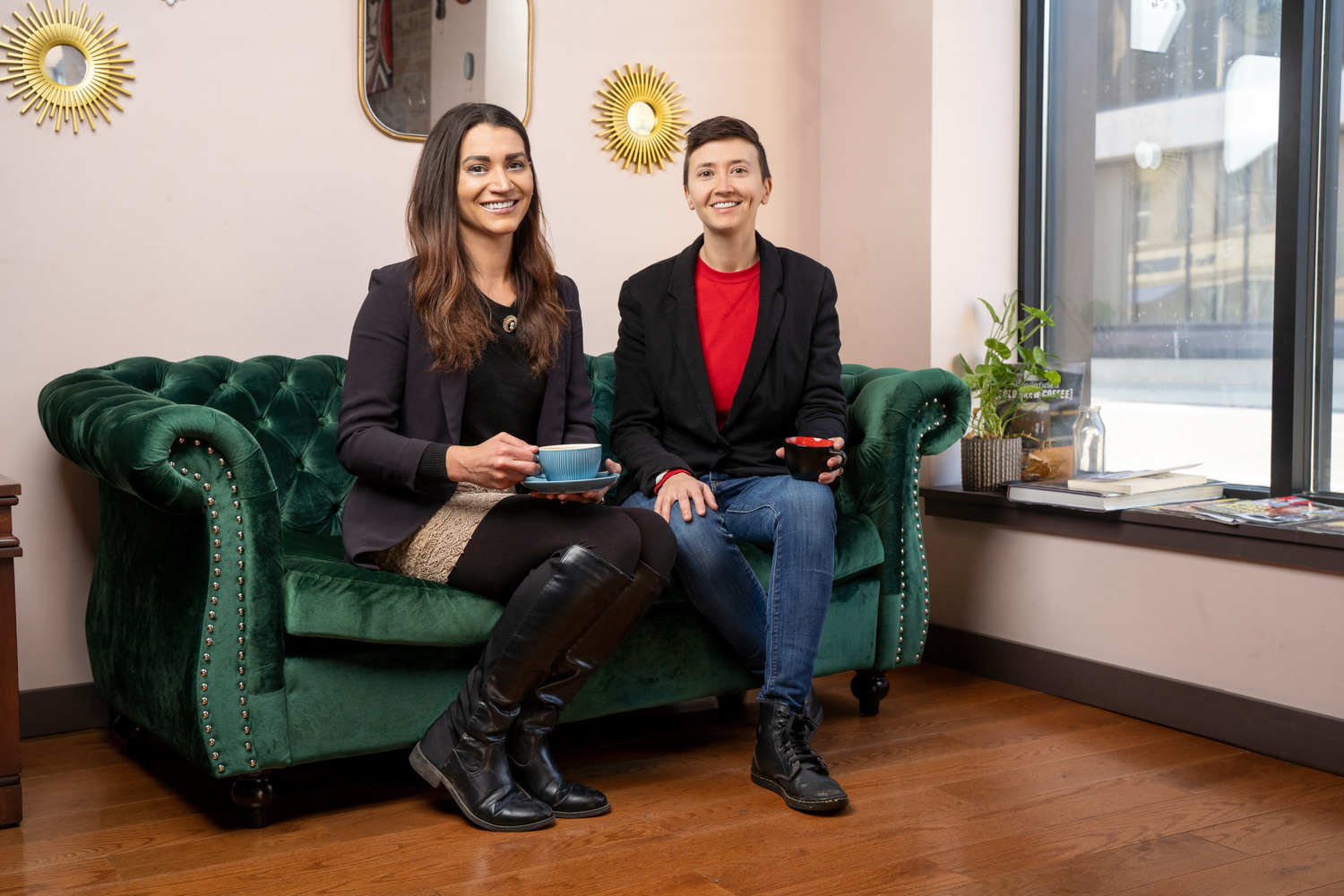 Growing up as a gay woman in a small Ohio town, Leann Cantrell didn’t feel she had anywhere where she could simply be. While gay bars are a welcome place for LGBTQ+ adults, there wasn’t a space specifically for queer youth.

When Cantrell moved to Perrysburg about eight years ago, it wasn’t for any particular reason – in fact, she says, it didn’t really make sense at the time. She was moving farther from her job in Fremont. But it would lead her to meeting her now wife, Rebecca Ferstle, a Lake Orion, Michigan, native.

On the other hand, Ferstle attended Bowling Green State University and put down roots in northwest Ohio immediately after graduating. She enjoyed the diversity that existed in the region, and when she moved to downtown Toledo for a job opportunity in 2017, she was home.

“I completely fell in love with downtown and the whole renaissance of downtown and how it’s kind of being rebuilt,” says Ferstle. “Then, when I met Leann, I talked her into staying, too, because she was thinking about moving away.”

Ferstle wanted to show Cantrell what the Toledo Region had to offer. They share a love of running, so Ferstle began to take Cantrell on tours of the city on their dates.

“Several of our first couple dates were just going for a run downtown, and that’s one of the ways I talked Leann into liking downtown. I lived kind of by the library and I’m like, ‘Well, we’re going to go for a run downtown, I’m going to show you how cool it is,’” Ferstle says. “Just pointing out buildings and different murals … and cool architecture, stuff like that.”

Ferstle and Cantrell met in 2018, just six weeks before Cantrell, who is in the U.S. Army Reserve, was deployed. Though distance separated them, their relationship flourished. Cantrell took a four-day pass from out-of-state training, and they married. Then, Cantrell was deployed to Syria from spring 2018 through winter 2019. While it seems like an atypical start to a relationship, Ferstle and Cantrell agree that it made all the sense in the world.

“It’s very common for people in the military to just go to the courthouse and get married before deployment,” Ferstle says. “But it’s also not unusual for some lesbian relationships, too. Perfect storm.” 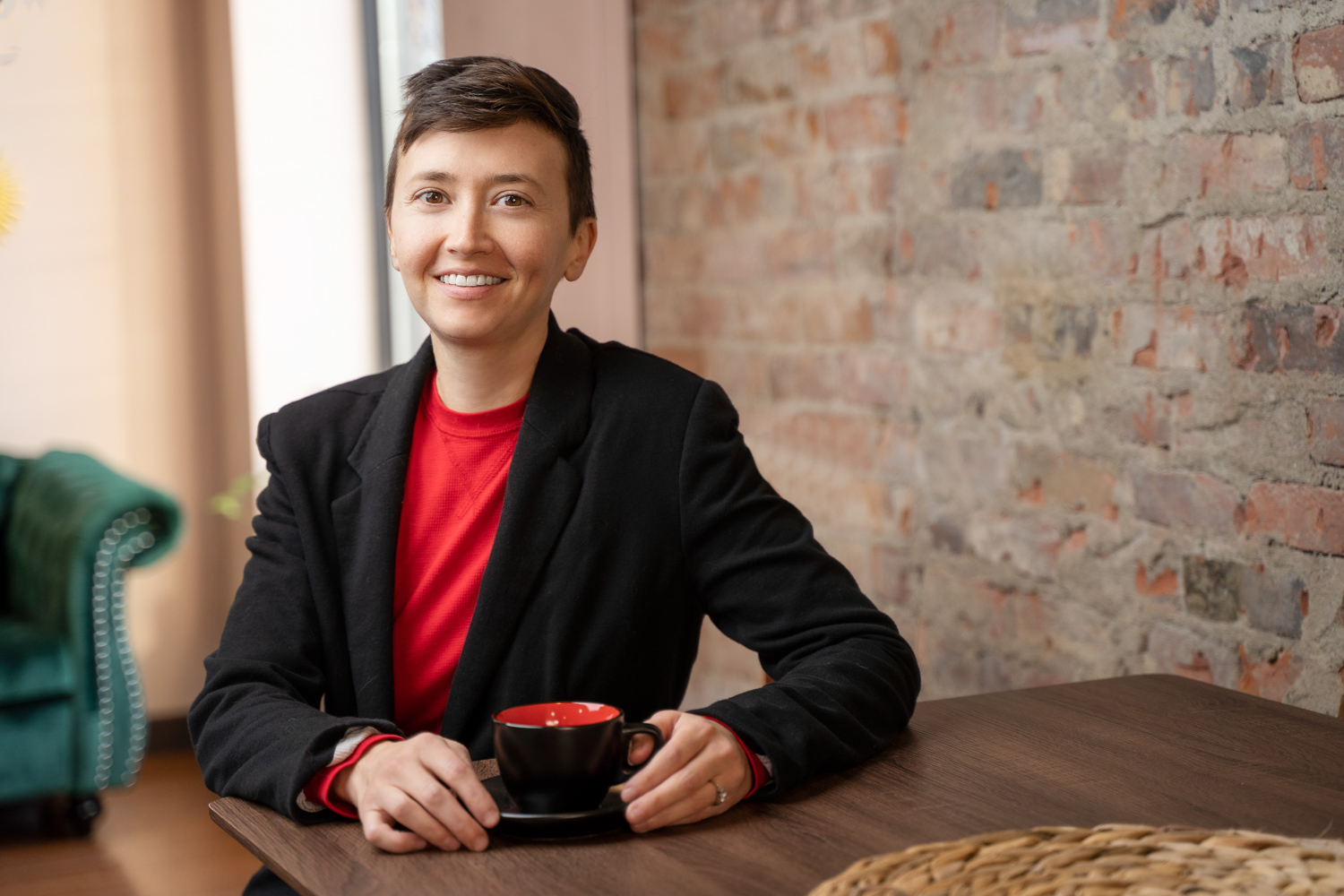 During Cantrell’s deployment, Ferstle says, she was a newlywed with plenty of time to herself. The two had talked about going into business together, as Cantrell was burned out from workplace culture and knew something needed to change.

“Leann was deployed so I had a lot of time to think creatively, I supposed, and journal and stuff like that. We would talk on the phone and write letters, and that’s when having a coffee shop, I think, first came up,” says Ferstle. “That was when it first came up, and you know, kind of went from there and dove in, and I was like, ‘There’s so many resources in Toledo we can use. This is so realistic.’”

Cantrell had worked in a coffee shop in her mid-20s and had enjoyed the atmosphere and company culture. Why not build a coffee shop of her own with her wife and now business partner and replicate that positive environment?

“My customers were great, my coworkers were great. Management, I enjoyed it. It didn’t feel like a job to me,” Cantrell says. “I enjoyed coming in every day, and I thought if I could do anything and pay the bills, that would be it.”

But, as a same-sex couple in the Toledo Region, they wanted to make their coffeehouse something more. They wanted to create the space that Cantrell needed as a young kid in the LGBTQ+ community.

“I think it’s a space that I needed when I was younger. I had to wait until I was old enough to go to bars,” Cantrell says. “There wasn’t – especially growing up in a small town – that sense of community.”

So, Ferstle and Cantrell got into the logistics. What would an LGBTQ+-friendly coffeehouse look like in the Toledo Region? They decided immediately they wanted to partner with a roaster whose coffee you couldn’t already find nearby, and struck gold when they discovered Uncommon Coffee Roasters, an LGBTQ+ roaster based in Saugatuck, Michigan. For business guidance, they sought help from the Toledo Small Business Development Center.

“A lot of people don’t think about the LGBTQ community. Before we came around, the only places for people to visit in a legitimately safe space was bars, and that’s not the healthiest atmosphere in the world; not everyone’s welcome,” Ferstle says. “We have to think about the youth. Just having something genuinely wholesome and caring. And luckily, we were right. It was easy to work into the community.” 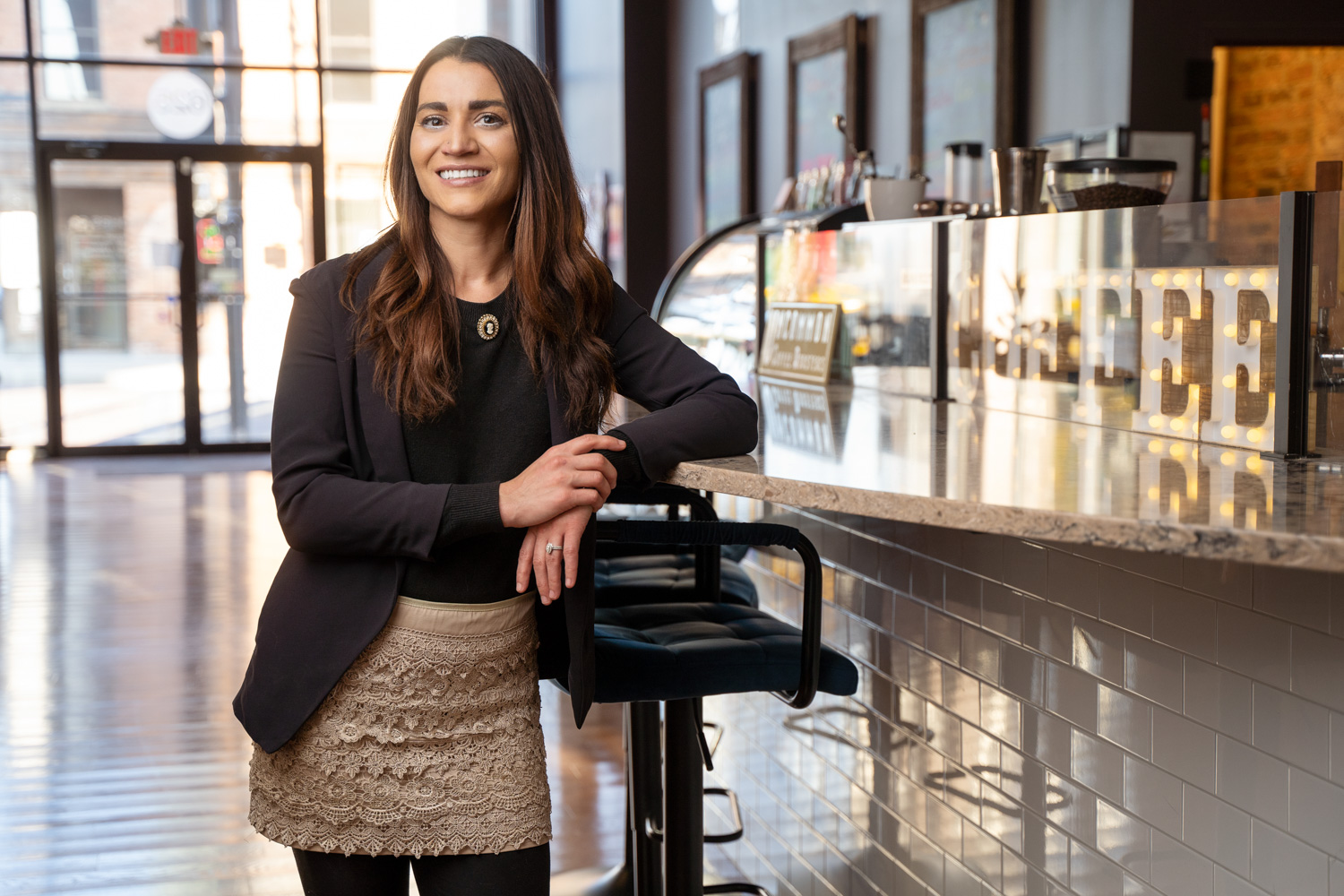 On March 4, 2021, Grindhrs Coffee and Community opened its doors in downtown Toledo, and the reception has been phenomenal. Their respective families have been encouraging as well. Ferstle’s dad, Neil, is a business owner as well, and provides advice and support. Cantrell’s mom, Lynn Kavanaugh, insists upon getting a picture at every table whenever she comes in.

The whole community, particularly the small business community of downtown Toledo and the LGBTQ+ community throughout the Toledo Region, has shown true enthusiasm for Grindhrs as well. Cantrell and Ferstle have created the space that Cantrell needed as a young woman – a space that many queer youths need today.

“We can’t express just the reassuring messages from parents that are like, ‘I have a 16-year-old and we came to your shop and we were so excited,’” Ferstle says. “First, we were, of course, sleep deprived. But the first couple of weeks of being open, we’d read these messages and just cry.”

Ferstle and Cantrell now live in the Old West End with their dogs, Glenn and Quinn, and cats, Puma and Barb. When they’re not at Grindhrs serving coffee, baked goodness and even ice cream in the delightful and Instagrammable space they’ve created, they’re at the wealth of events around the Toledo Region or exploring one of the incredible Metroparks Toledo parks.

And simply by existing here and providing a space for others to feel comfortable and safe, too, they’re making northwest Ohio a more colorful place to live.

“My mom made a comment recently about, like, ‘Remember when you were 19 and you told me you just quit your job without anything?’” Cantrell says. “Well, every decision led me to this point.”